Yes, thats right! I will show you how to build a fully functional night vision device!

Press read more for the whole How-to!
At first you will need an old analog camcorder.
I bought 3 of them for 10 € on ebay. They are very cheap and full of useful electronics. 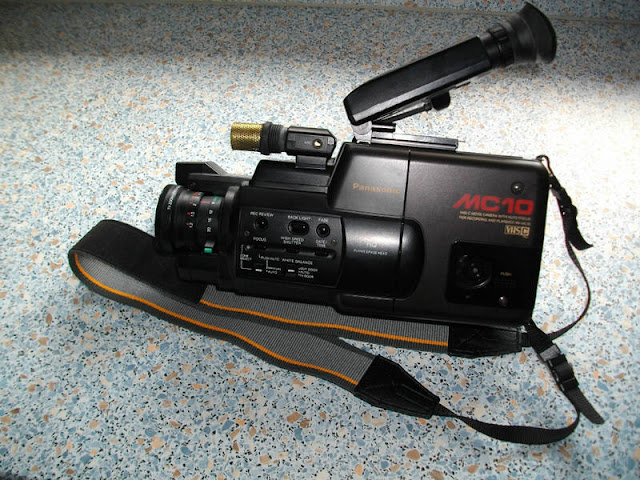 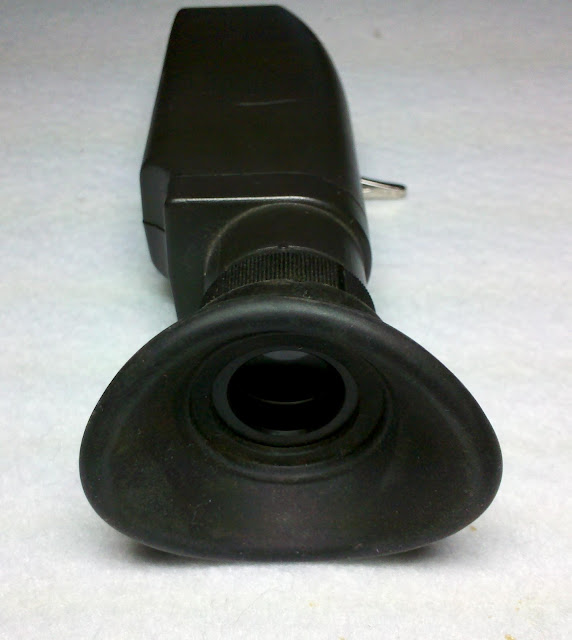 Remove the lense part on top of the viewfinder and carefully open the casing. 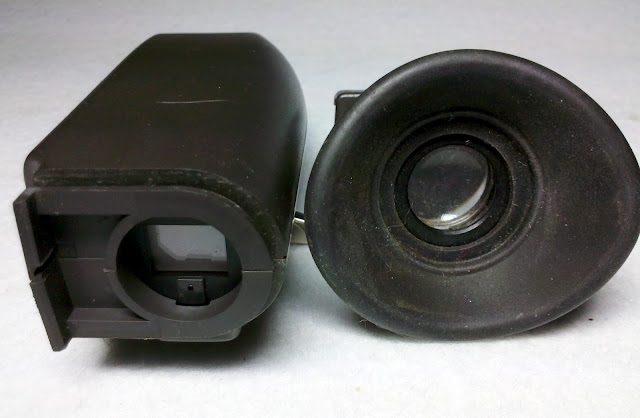 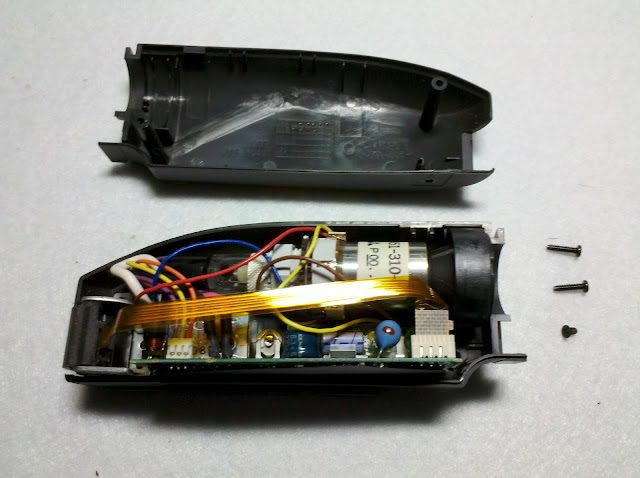 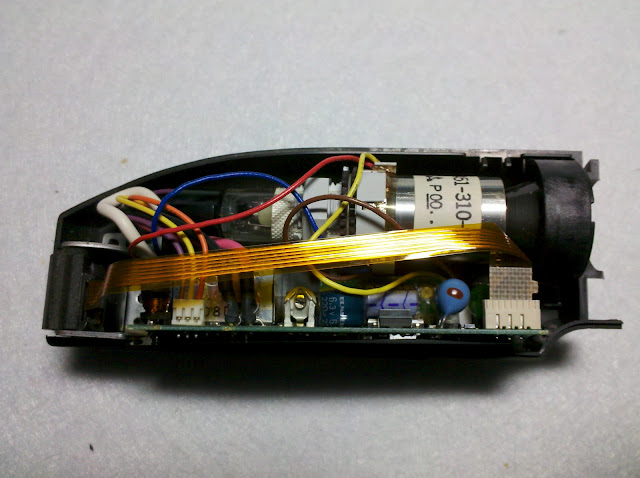 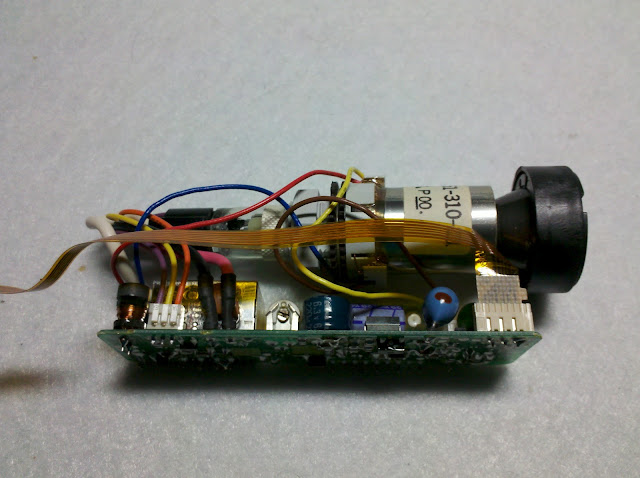 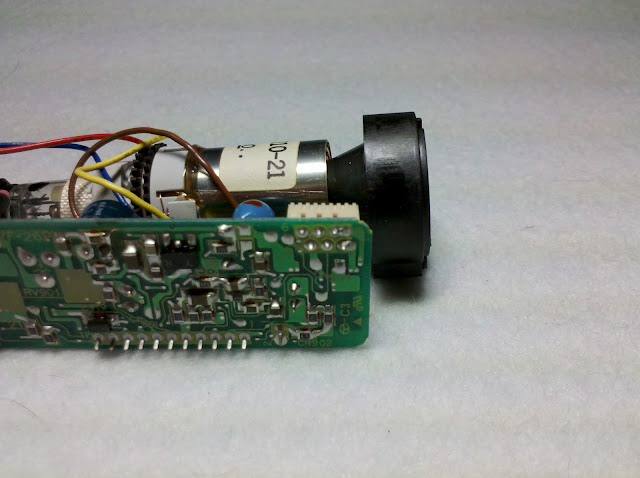 You can see the connections in the top right of the circuit board. I carefully tested which ones were power (5volts). After that i soldered some wires to the pins. 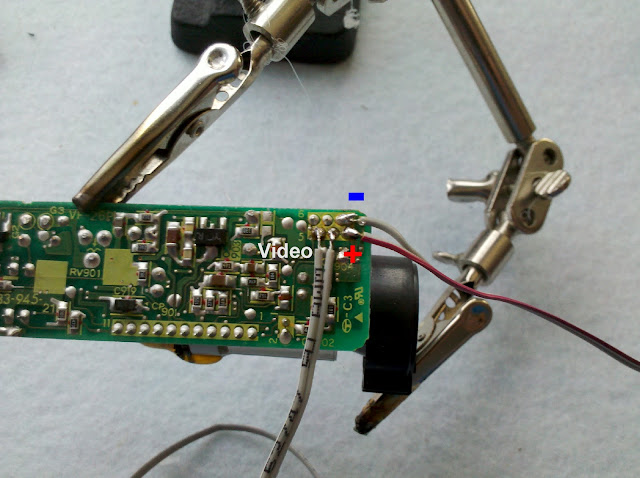 This picture shows me trying to find the video signal input pins. After discovering the power pins i just turned it on, took a video signal and tried the remaining pins until something showed up on the small screen. 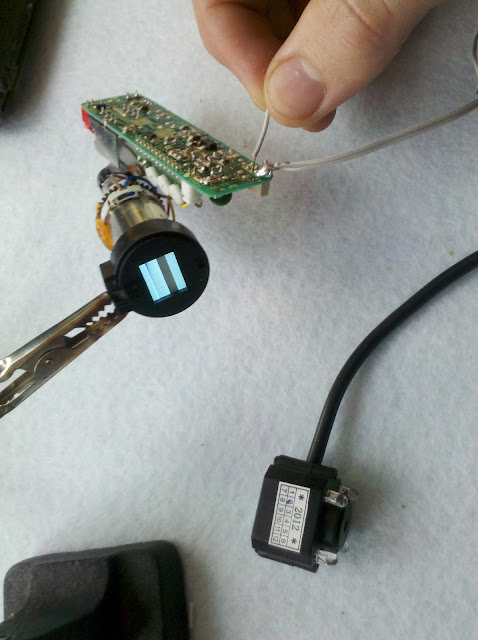 The next step is putting the viewfinger back together. 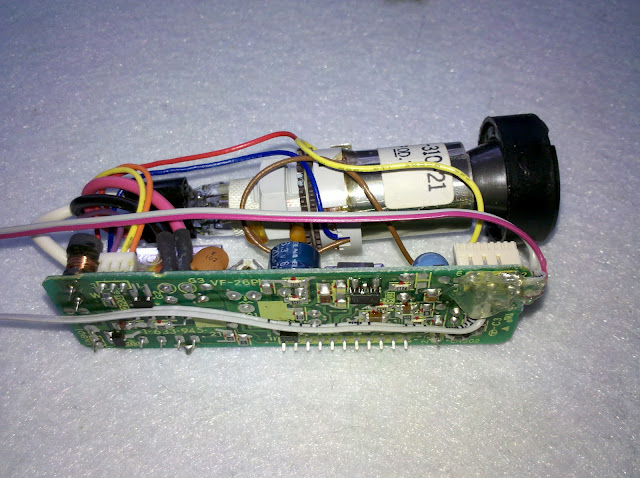 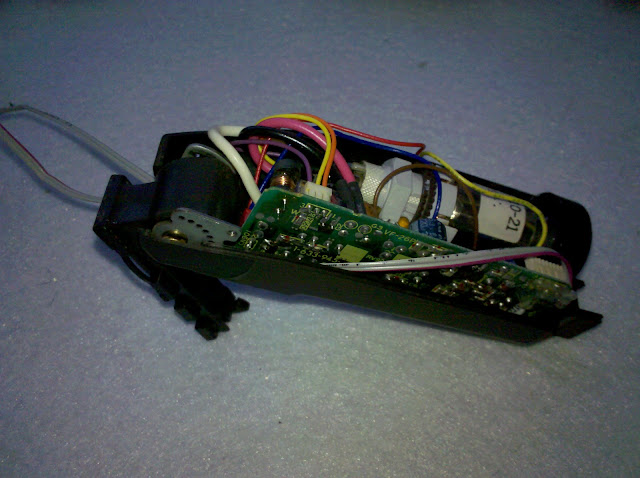 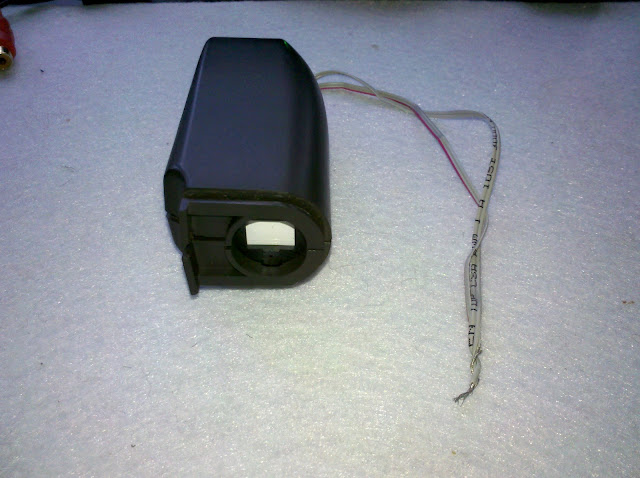 In order to see something in the dark we will need a CMOS camera.
There are plenty of CMOS cameras out there. I purchased one with little IR leds. CMOS cameras can detect IR light and thus are with the help of IR leds able to see in the dark!
This camera was 11$ in a world wide shipping shop named dealextreme. It works perfectly! 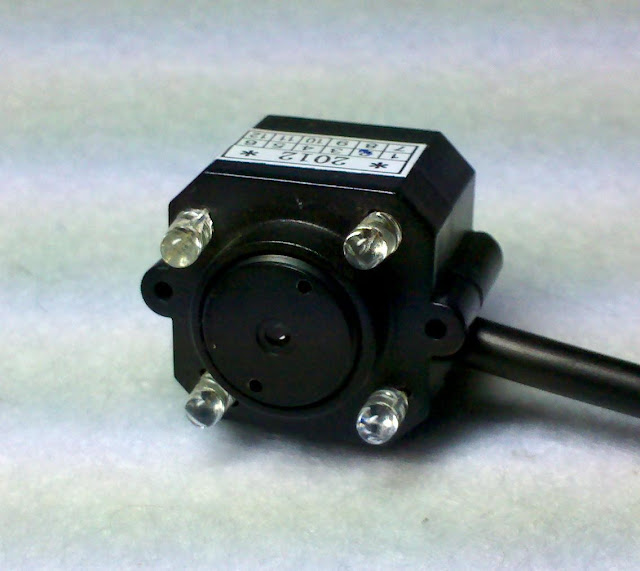 It runs on 9 Volts and has an analog video output. I cut of the plugs and wired the video output directly to the viewfinder. The yellow cable is the video signal, the white is audio and the black is power. 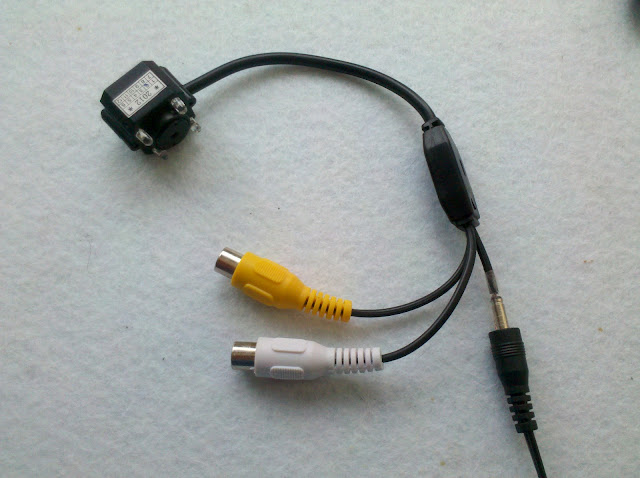 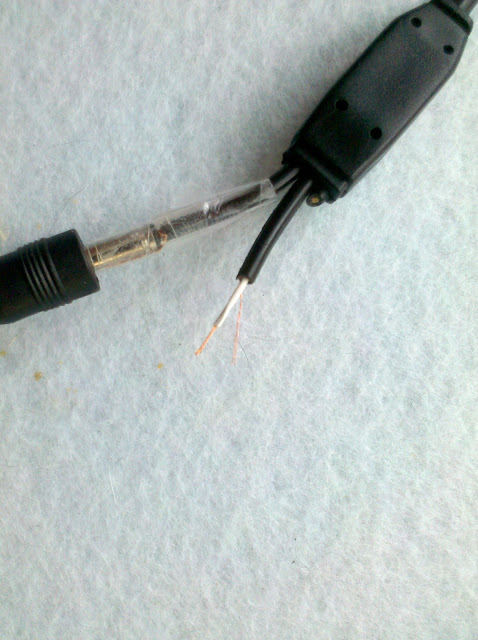 Now its time for a test of our little set up. Camera and viewfinder are running… 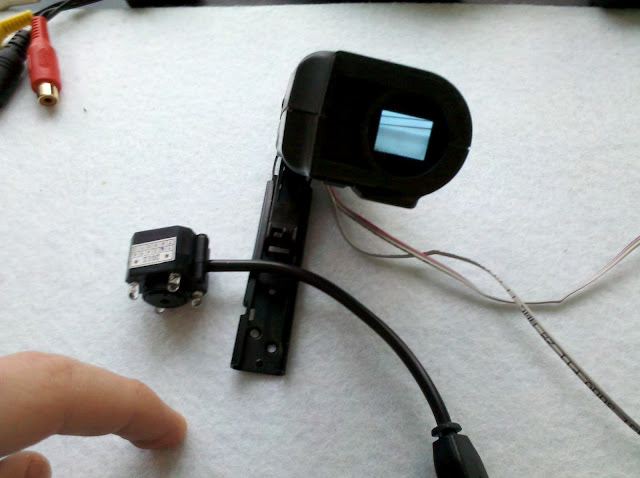 … and it works! Now its time to calibrate the viewfinder. There are little variable resistors on the back of the viewfinder which can be use to in and decrease brightness and contrast: 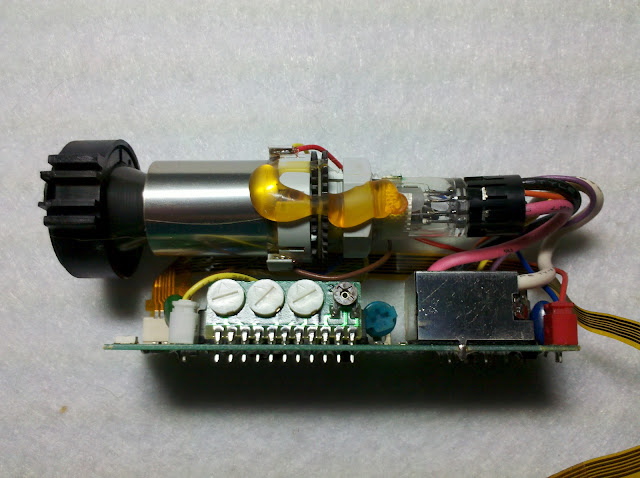 All you need to do now is find a nice casing, take the camera and viewfinder and some batteries and your night vision device is finished!
If you want to see even more in the darkness, you can add some IR leds. They are cheap and easy to install. This is my night vision device. You can see everything up to 20 meters in a completely dark knight. I added some switches to turn on/off the camera, the viewfinder and the additional IR leds. I even added a little video socket so I’d be able to record the footage from the camera at night if i wanted to. 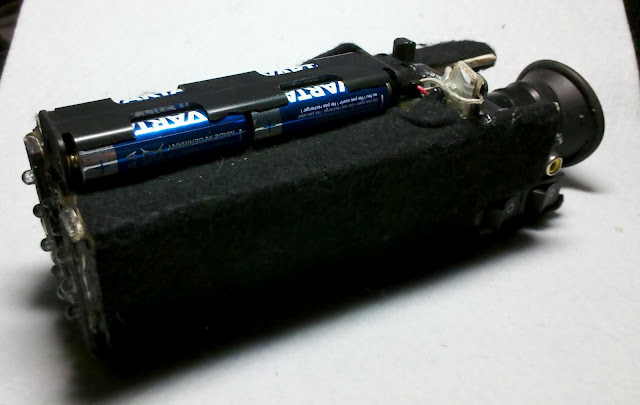 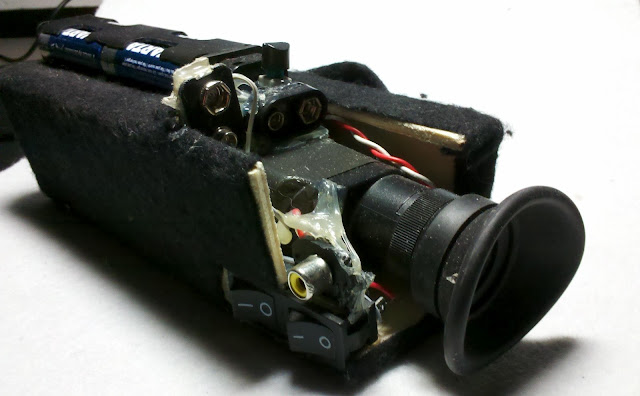 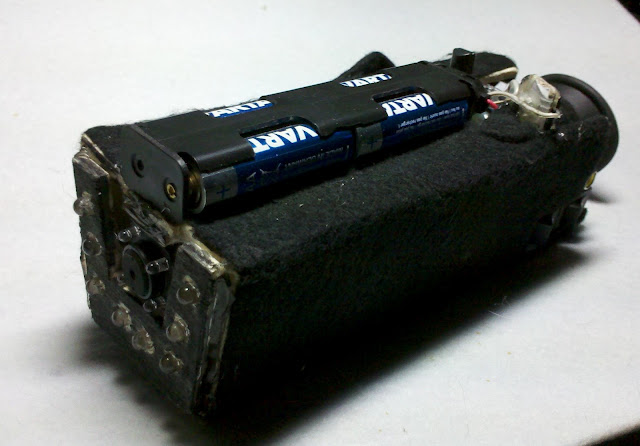 And here are some videos, I am sorry for the poor quality, but due to the viewfinders frequenzy it was very difficult to film the scene. The video was shot in complete darkness.
Here’s a picture of the infrared Leds turned on and off. 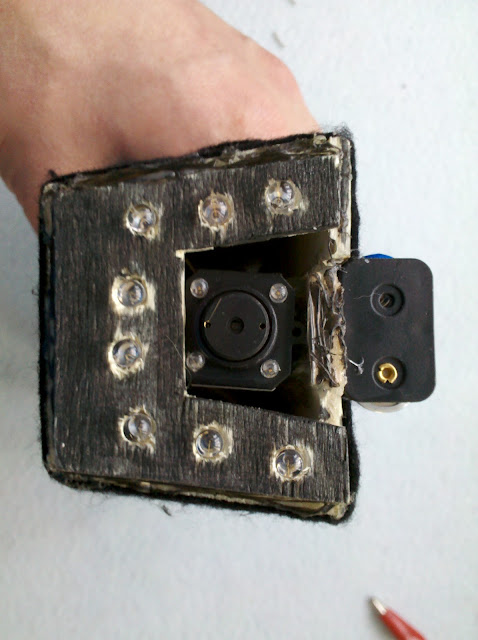 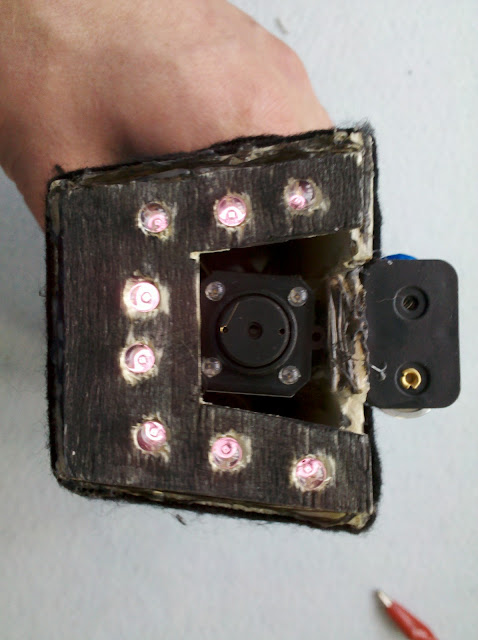